Now that you have fully healed yourself, you’ve regained your key abilities.  It is a good thing to as you are surrounded by a small band of gnolls.  Swirling around in a complete circle, your whirlwind ability slashes deeply into them, felling each one before they have a chance to swing at you with their halberds.  They were foolish to get so close with such a large weapon.  Spotting one last straggler attempting to run and warn the rest of the tribe, you flash your sword in his direction, sending a phantom of your blade into the enemy’s back.  Catching your breath from the skirmish, you reach down and hold the large crystal heart over your head in triumph as you feel your energy expand a bit more.

On occasion, it is fun to take an existing character in media, literature, or gaming and challenge myself to create an accurate, playable character for an RPG.  Typically I use a modern-style rule system such as Pathfinder or D&D 3.0+ as they give me more variety on options.  Although I can create a general likeness of a famous character in a 1st edition AD&D game, the choices to make that character are much more limited and simplified.

My favorite character to create is Link from the Zelda video game series.  Although most would classify him as a fighter type character, ever since the N64 “Zelda: Ocarina of Time,” he has clearly been a bard.  A bard is the truest form of jack of all trades.  They are the cleverest bunch, able to sort out just about anything from their wealth of knowledge during their travels.  They are capable of understanding things merely but inspecting them and remembering either studying from their college or adventures.  Magical items are familiar to them.  They can cast spells.  They can pick locks and disarm traps.  They can brandish weapons and pit against warriors.  They can heal.  They can speak dozens of languages. 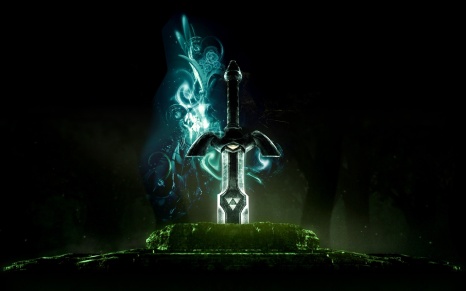 Focusing on Link and his history throughout his long-lasting series of games, he has always had a sword and a shield.  He never wears heavy armor.  He has a backpack full of both magical and mundane tools and lots of them.  He can play musical instruments.  He’s handy with the bow.  All of these point him in the direction of the bard.

Using a system like Pathfinder, we begin with the basic elements of the character.  Link is a Hylian in the video game series, which according to lore, matches very closely to Half-Elves in Pathfinder.  We’ve already established him as a bard although he could multiclass into ranger, paladin or alchemist for the use of bombs if the GM allows.  Statistically he is great with a one-armed sword and shield, so he will need some strength while his bow shots demand his dexterity to be respectable.  His intelligence and charisma can be dumped because even in the cartoon he wasn’t the brightest person.  In fact, I don’t believe he ever talks in most of the video games (not saying a mute is ignorant, but someone with low intelligence might be remain quiet from confusion on what to say).

Since the N64 version, he has had the ability to roll to dodge attacks, so his Athletics skill should be as high as possible.  He never has had a need to pick locks as obtaining keys for locked chests has been a staple in his series, so save the points on that for now.  Knowledge Arcana, Dungeoneering, and Nature should be purchased as he has respectable backgrounds for each.  During the games since 3D was featured, when something important was within proximity, the game would immediately focus on that point, so his perception should be high.  He can ride Epona, so Riding should be another feature along with the feat that allows him to shoot a bow while riding, Mounted Combat.  Swimming was a feature after acquiring flippers as far back as Links Awakening and a Link to the Past, so Swimming would be fitting although perhaps not as important as a usual choice.  Finally Use Magic Device would be a definite choice as he has used an assortment of magical items.

He doesn’t wear any armor, but if we were to truly keep him accurate, gauntlets would be required, preferably Gauntlets of Ogre Power since they were exactly that in the game, giving him the ability to lift heavy boulders.  His tunics were nothing but leather or cloth, but some featured resistances to various elements such as fire in A Link to the Past.  For now, the gauntlets will suffice although perhaps a ring of protection +1 might be nice to help his starting AC depending on what level to make him.  Beginning a character from scratch, the only way to present the gauntlets would be an inheritance though it would still give the low level character quite a starting boost.

His choice of weapon has always been a long sword to accompany his shield, which changes throughout the games.  Almost all of his shields have been all metal, so no need for wooden shields, and they must not be larger than a medium size.  He had only a few shields that were capable of blocking just about everything, but it should be assumed they were small enough to handle easily and still be dexterous rather than carrying a tower shield.  Call the sword a Master Sword (longsword).  He could acquire a Mirror Shield later on as he advances.  A composite longbow will round out initial weapons for now as the hookshot, boomerang, and other iconic weapons can be acquired as he progresses.

His choice of bardic instrument would be the ocarina, naturally, as he is most famous for playing such.  Similarly to the N64 game, the instrument could be a progressive magical item, granting him a new song every few levels.  This would be a house rule as typically the bard’s ability to either counter alluring songs or hypnotize others is through his magical ability as a bard and not the instrument itself.

For feats, Toughness would need to not only be a choice, but a regular choice throughout.  Granted hit points increase naturally as you gain levels like the rest, but his increase in life comes from acquiring quarter and full hearts.

The whirlwind attack is another feat to add as he picked up that ability in the SNES version.  When he is fully healed, his sword was capable of blasting phantom versions of his blade at enemies.  Although no feat does this, there are a few spells that have similar effects such as Death Ray that can be placed upon the longsword.  Alternatively, the sword can have a simple House Rule where it deals electrical damage as a ranged touch attack when wielder is at full health.  That is a bit powerful for a beginning character, so perhaps it can merely attack as a ranged attack, using Dexterity instead of Strength, when at full health.  The former suggestion could be something acquired much later in advancement.

Feel free to post a PDF of your version of Link as a character suitable for your favorite RPG.  I’ll post mine later this evening on here for easy download.