You do not reach for your Warhammer.  You reach for Aeichioch Bone Shatter.  The same weapon that did not fail you while battling at Hemshire.  The same weapon that landed the death blow to Captain James Mastifson upon twilight.  Yes, Aeichoch Bone Shatter has been your grip of steel since your first days as an adventurer, and you need not dream of a day without it for that day shall not come.  You will lay in your grave at the end of your day still clutched to the mighty instrument.  Swing with it effortlessly as you face your truest opponent now and rest assured with Aeichoch in your hands,  you shall not perish in battle.

For years, magical weapons and armor were merely described as a numerical value, usually from +1 to +5.  These were used when rolling dice to know how much was added to the roll either to achieve a successful hit or the amount of damage.  Either way, we brandished longsword +1  or composite longbow +3.  The number is necessary, sure, but when roleplaying, you have absolutely nothing to go on by having a +2 on the suffix of the name.  No one would yell out “Beware of my +3 longsword!”  except out of character at the dinner table.  In terms of gameplay and story enrichment, it’s a terrible thing to blurt out. 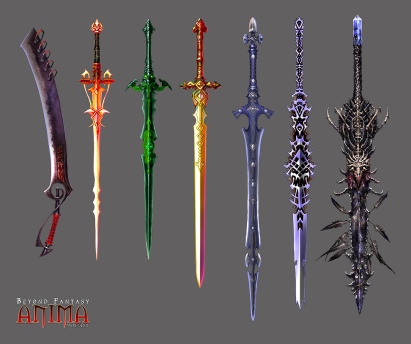 Bring on the adjectives!  Bring on the full names that represent our choice of weapon.  Much like Roy Hobbs named his baseball bat Wonderboy in the movie The Natural starring Robert Redford, when you name anything, it immediately becomes personified and personal.  It takes on its own character and becomes more meaningful.  A teddy bear is just a teddy bear until we give it a name.

In some RPGs, you may experience moments where magical weapons or armor comes into your possession, sometimes fairly rapidly from encounter to encounter.  Yet how often do we drop our current magical weapon for another one when they both do the same damage or enchantment?  It usually takes a bit more to convince us to let go of our weapon because, why?  What difference does it really make if we are wielding a longsword +1  or a battleaxe +1 other than the latter has a higher critical damage threshold (per mainstream modern RPGs)?  We may want to switch to a bludgeoning weapon instead of a piercing one, but those decisions are based upon facing a specific kind of opponent.

But ignoring the various nuances of weapons of choice, when it comes down to it, we want to be excited to have whatever weapon that is in our hands.  Whether it’s a special magical staff or a giant scimitar or a bow made of a rare material, it needs to have reason of why we chose it among the rest.  Unless we are just going to leave our decisions to the fate of statistics and damage values, our selection should have more flavor to it.

Instead of calling a battle axe with magical properties battleaxe +1, give it an adjective to go with it.  Splintering Battleaxe, Earthshaking Warhammer, Bonechilling Longbow.  It still is a magical weapon, and under a microscope it still has the proper numerical enchantment tied to it.  However, it is referred to a more proper name to give it a richness about the weapon. 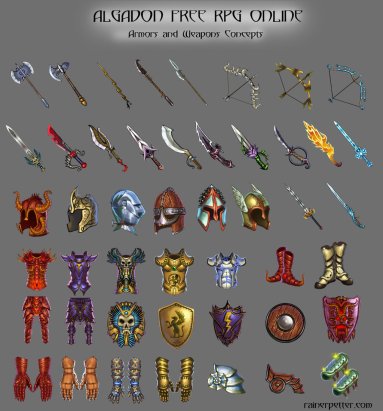 Confusion would set in if the descriptor was added as a suffix to the weapon because there are specific named magical weapons that have special abilities beyond just a numerical value such as Longsword of Wounding.  Avoid the use of some adjectives that are commonly used in reference to them already such as Holy Avenger.  Instead, lay out a set list of specific names referring to the various numerical levels of enchantment.  For example, any +1 enchanted weapon would earn the prefix devilish, to which it would be a devilish battleaxe.  It would automatically register in your mind that a devilish longsword would be a +1 weapon.  Likewise when acquiring a longsword +1 it would be referred to as devilish longsword.  It eliminates the wording of +1 that retracts you from the immersion.

Typically magical enchantments range between 1 and 5, so only a few names need be created by the GM (or with the player’s help, which will connect them better to the game).  Once they are established, they should not be changed throughout the campaign or adventure to avoid confusion.  Here are just some suggestions.

It could take a little bit to memorize all 5, but the process is a slow progression as you level you characters and become more exposed to the next “level” of enchantment.  It should be ample time to adjust to the reference. 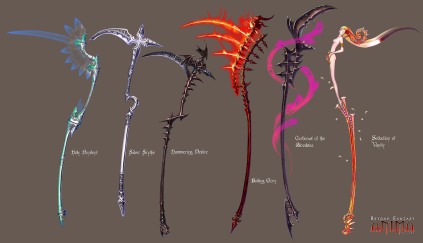 But this suggestion comes only from “generic” magical weapons and armor that have numerical value to them.  As originally mentioned, naming your weapon or armor can add life to your typical mundane gear.  Even magical items such as a longsword +1 can spring to life by calling it Hellcat’s Longtooth.  It need not maintain the generic adjective list provided above if players wish to personify their gear.  This article is solely for the encouragement to remove the general rule references that make RPGs sound more like a math contest than a fantasy adventure.  Change up the wording.  Use more description in your dialogue to make the doldrums of everyday chatter a thing of the past.