There are some GMs out there who enjoy bringing far too much stuff to a convention or game day with friends.  I’ve seen some impressive spreads that literally cover an entire table when laid out.  And for those individuals, apparently it works well for them.  But we are talking about simply running an effective game with proper mechanics to make sure it is both fun and engaging while keeping a good pace.  Bring too many things to the table, and then suddenly you have stuff that can bog down the flow.  Having a good spread of tools can keep gaming at a luxury and full of convenience, but there really is a limit to just how much stuff one really needs to complete a game efficiently.

For starters, most GM toolboxes usually have the players in mind first because they can be taken care of with the least amount of effort.  Generally players simply need some piece of paper that has information of their character on it, some dice, and a writing utensil.  That is really all they need with a few exceptions of added flair such as bennies or counters for various supplemental rule systems.  But really if you give those three things to your players, they will not have any problems during the game.  And really the dice will come up usually only with new comers to the game or just those who forgot their dice back up in their hotel room.

So let’s get down to what really matters: the GMs tools.  First know your environment of the convention or at least predict the worst.  Expect your table to not be as big as you hoped for, the outlet to not be anywhere near where you’re stationed, the A/C to suck because of so many people in the room, and the vending machine to be nowhere in sight.  There are small collapsible tables that can be bought extremely cheap that provide anywhere from a 12” area up to a 2 foot table top that can be a savior for your work.  If you are one who enjoys using a traditional GM Screen as well as a laptop or tablet, you’re going to need more space.  The screens are taking up the table space in front of you, and putting a laptop beside it will be blocked from view from the screen and take up possible premium space for your players.  Although you’ll need to be careful of the table with your laptop on it as it will be very top heavy, it will provide that extra real estate that you otherwise won’t get. 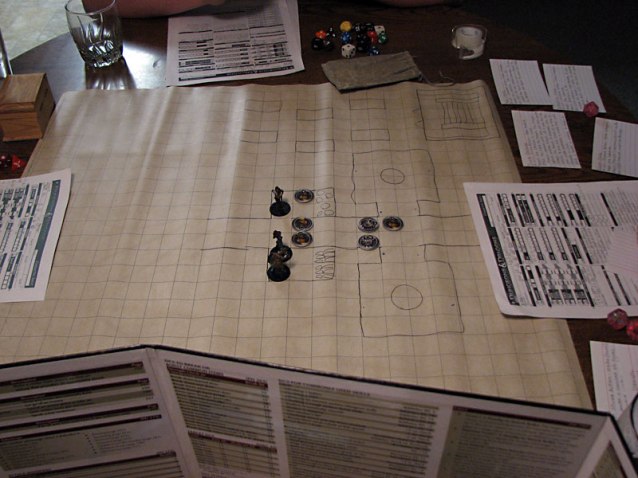 Do you like bringing minis?  Are battle maps your style or do you prefer having them pre-drawn?  Personally I prefer white, dry erase boards that are permanently gridded when using minis or having large prints of full color images as battle maps tend to always have either wrinkles somewhere or curl up at the ends from being rolled up for so long.  The ones from Crystal Caste may look nice and work for some, but I have never found a single battle map that will lay down completely flat with zero wrinkles.  Dry erase boards sometimes come gridded, but it is very easy to just buy a cheap one at the store and grid it yourself using permanent markers.  Measure out your 1-inch grid marks along the edges, then connect the marks using a ruler.  If you don’t have a ruler long enough for the board, you can tape string on the edges and make it taunt as you follow the contour.

Don’t go looking for your minis in a tackle box during game play.  That is what your GM screen is for.  Place your minis behind it, up against the cardboard and out of the way until they are needed.  It will speed up play because it gets very annoying when you are anxiously awaiting combat to begin but have to wait for the GM as he runs his fingers over the big pile of minis trying to find one that is “close enough.”  That’s another side note for GMs:  know what monsters you are definitely going to run and make sure you have them when you arrive.  You’ll have plenty of time to pick up online before the convention or game day.  They are very cheap anymore now that the big hitters of Wizkids, Paizo, and Wizards have all mass produced pre-painted figs.  If you know you’re throwing a beholder at the party next session, grab it.  You don’t need to bring every mini you have in your arsenal either unless you are planning to remove the minis you need before game start.  No one really cares that you have 12,532 minis, so no need to try showing them off.

Another tool GMs like bringing along are both tokens and markers.  The former can be used for various counting methods that are more visually impressive than simply writing them down on a piece of paper.  The markers can be really nice if you are going to include a lot of situational modifiers such as fatigue, haste, poisoned, or the like.  These are merely colored discs that rest under the fig and represent the condition.

Dice towers or at least dice trays are really handy when you are cramped for space, especially if you are using minis in your game.  As I said before, expect your real estate at a convention to be at a premium after you sit 5-8 players, plus you, plus the GM screen, plus the battle mat, plus character sheets (those take up space too), plus possible books if you are that kind of GM.  Rolling dice should have a little more room than merely dropping them straight down.  They have a tendency to roll off the table or knock minis over.  A simple dice tray is ideal.  There is even one made of felt on Etsy that rolls up into a tight little cylinder only a few inches long that provides plenty of room for rolling (Found here, they measure only 5 inches long when rolled up but stretch out to 10 inches when unraveled).

So in your backpack, throw in a pack of pencils or pens, a bag of dice, a folder with the pre-made characters and player info, your 12” collapsible table with tablet, only the minis you’ll use for the game, a bag of tokens and markers, your collapsible dice tray, and the battle mat or dry erase board with the proper markers and eraser.  If you’re using a relatively small white board, a backpack can fit everything listed here comfortably including a tablet.  And this is all if you are going to run a more tactile game.  If you are play a traditional RPG such as 1st edition AD&D, then eliminate the tablet, table, white board, and minis.  With what’s left, you barely even need a backpack to carry everything as it will be light as a feather (your back will thank you).

Hopefully you aren’t one who needs to bring rule books to conventions as the PDF should be quicker on references and takes up less space.  If you’re a smart GM, your pre-made characters include a print out of Known Spells/Abilities with their descriptions for your special characters.  This will eliminate a need for a book because the rule judgments will be up to you and you alone.

Choose a backpack that has an exterior slot for bottled water, and throw in some food bars to cover the need to hunt for vending machines while at a convention.  With this packed up you should be good to go for the con without having to break your back carrying unnecessary garbage.