He snuffed out the half-burnt cigarette he found on the ground and breathed out the dark, black fumes through his nose.  His eyes sparkled red in the dark as they took in the surroundings like the noon day sun.  He knew he was being hunted by something just beyond his sharp vision, but he welcomed the company after being thick in the bush for weeks.  His fingers picked up a few pinches of dirt and placed them on the tip of his tongue.  It was a Rodarian Hellcat by the taste and smell.  The slightest hint of a smirk crossed his lips before slipping his long knives out and twirled them a bit in anticipation.  Leaping up to the lowest branch of the tree he stood by, he coiled his tail around it and hung himself down, ready for the ambush.

Wait, wait.  Before you throw that character in the trash or hit the delete key, just wait a second.  Are you wanting to start again because your stats don’t match the class you wanted or are you thinking the numbers don’t add up high enough to make it a power-rich character for your insecure needs?  We play roleplaying games to take part in a journey with characters hopefully not like us.  Yet sometimes we get caught up in the moment and illusion, dreaming of characters a bit too far ahead of our own intellectual grasp.  Sure that character has the strength of 50 men and can lift a boulder and toss it at enemies, which can be fun for a while, but will it be fun in the long run after hurling the 500th boulder? 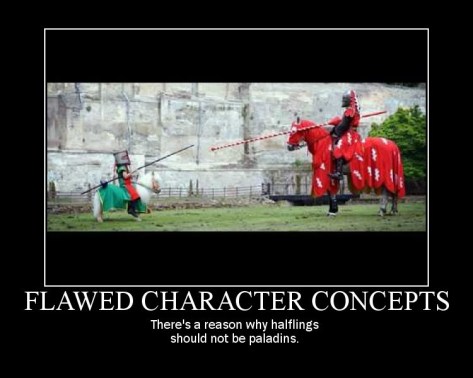 So why do we shy away from characters we initially make that we feel are inferior?  “Because they are!”

…but are they really?  What if you were planning on playing a barbarian, but your stats (let’s assume it’s some kind of a traditional roleplaying game) come out: Strength 8, Dexterity 9, Constitution 7, Intelligence 12, Wisdom 10, Charisma 10.  That’s a throw-away character right there, right?  We have negative modifiers for crying out loud!  Well playing these kind of games takes creativity and imagination, so let’s use both and come up with a way of making this would be throw-away interesting enough to at least play through a few levels.

BACKGROUND:  Jasper never was truly cut out to be a barbarian.  Born and raised among the aristocratic community of Hollow Creek Estates, he was set to inherit his family’s fortune safely buried underground in the family vault.  He was shown sophistication, education, and a philosophy on life, but his mind was in the clouds from childhood.  There was a never ending nag inside of him to be more aggressive, beyond business negotiations and networking.  He wanted the life outside of the city where his ambitions ran free and his energy unleashed.  He craved to wield a weapon and swing it at something.

He was an average looking half-orc, having magically altered his appearance through his family funds, and his wealth of high society gave him the confidence he needed to take on life in the wild and be a survivor.  Secretly he would pay for druid gypsies passing by to show him whatever they would to make sure he lived well in the woods and along the prairies.  If the carnival came to town, he’d watch and take notes of the acrobats in their amazing maneuvers.  He became close friends with the city’s highest officers that granted him access with the secretive and mysterious Lox Nine, the king’s elite guards.

But all of these lessons were only half learned by the young man because his focus was lacking and his eagerness to be gone from the city and on his own was too great.  That’s really how he learned anything: halfway.  His rich cultural knowledge in sophistication, his hobbies and skills, even his education was halfway complete.  However, he took with what he had and made the best of it.  Along the way he acquired interesting traits, skills, and behaviors.

Part of his blood was tainted with a demon or devil, he knows not which.  The resistance was so strong that the magic used to alter his orcish features did nothing for his tail or his red, night-glowing eyes.  Naturally he has hid these two features fairly easily by means of trick glasses that bend light in a way to change his red eyes to a bluish hue while he wraps his tail around his waist under his clothing.  When he is outside of the bureaucratic lifestyle, he enjoys swinging his tail freely around and using it to suspend himself from trees and ambush wild game.

One feature he acquired from his ancestral bloodline is something he is unable to truly hide.  Completely at random and beyond his control, he sets objects on fire.  He need not touch anything but merely look at any one thing.  So far his ability has never occurred while looking at a living person which leads him to believe only inanimate objects are possible targets, though he isn’t sure.  Fortunately for him, it happens once in a great while and is separated from his actions enough not to draw suspicion.

His lighter side of life comes with a variety of uniqueness that makes for fun social moments.  Being a lover of nature and all things outdoors, he learned to mimic bird calls by the dozens.  His representation is so accurate he easily fools both birds and potential predators through his calls.  It flows over with people as well with his wonderful talent of impersonation.  If he listens to anyone speak for a few only a few seconds, he is capable of sounding perfectly like that individual whether it’s male or female.  The dialect is identical as long as it’s a language he understands.  He knows hundreds of songs to be sung in almost any occasion from taverns to churches and can recite without fail a different joke every day.

But when you boil down to it, he isn’t cut out to be a barbarian.  His arms are a bit weak, he finds himself stumbling on his own feet from time to time, and his ability to wield massive weapons with skill does not exist.  His memory fails him on occasion, especially with names which he can never remember, and his sophistication at talking eloquently only works among those not of the fairer sex to which he might be attracted to.  Just as an adolescent asking a girl to dance, he stutters and mumbles his way through, often saying the wrong thing or causing an awkward moment that ends with the girl running quickly away.  He’s never been with a woman before, and he has no concept of how to be in a relationship if one were to occur for him.

When it comes to combat, however, he does tend to use his brain better than a typical barbarian.  He isn’t stupid by any means, and his clever side can make an ugly situation pleasant.  He doesn’t know how to wield massive two-handed swords, but he knows the general movement of swinging a club or blade.  His imagination kicks in and works overtime as he surveys the environment and quickly can identify an item that can be used as a weapon.  The downside is that he sometimes will calculate a bit too high and select an item just a bit too heavy for him.  He’ll be able to swing it for a few attempts, but his accuracy will be dismal and his fatigue sets in quickly.

Will this character be any fun to play during combat?  It could be if the DM worked with me a bit.  I would want to try and compensate for the lack of strength Jasper had by implementing a house rule of either special abilities or minor bonuses from creativity of the chosen item.  For example, if I were to take a leaf rake and jam a trowel into the teeth to form a makeshift scythe or polearm, I’d get a +1 non-magical damage from the length of the pole giving me better leverage of motion.  If I tied a can I jammed nails out of the sides to a whip, I’d get a 1D4 points of extra damage whenever I successfully tripped an opponent.

Beyond combat, the character is never worthless because it is what you make of it.  As shown above, I took a character that clearly was not a barbarian and gave him reasons for being a mediocre barbarian.  I don’t shy away from going away from the norm.  Just because your character is a Wizard doesn’t mean he has to be wearing a robe and have frail arms.  If we made stereotypical characters, there wouldn’t be many choices really.  Making that normal character abnormal is where the creative ideas become more interesting.

You can even play it up as an exercise if you consider yourself a veteran.  The next time you roll up a character you are about to toss in the trash, approach it differently and see if you can’t come up with an interesting twist that makes it more interesting to play.  Work with the DM because usually with so many disadvantages and low numbers, a good DM will allow some special abilities or interesting perks that spice the throw-away up a notch.